Use the form above to find your loved one. You can search using the name of your loved one, or any family name for current or past services entrusted to our firm.

Click here to view all obituaries
Search Obituaries
Immediate Need
We are here to help you. If you have need of our services, please call us, day or night, at:
709-885-2609
To better prepare yourself, we have provided you with some helpful information regarding the immediate need process.
Contact Us / Location

In Memory of
Newman
Blagdon
1955 - 2022
Click above to light a memorial candle.
Memorial Candle Tribute From
Spencer's Funeral Home
"We are honored to provide this Book of Memories to the family."
View full message >>>
Send Flowers
Plant a Tree In Memory of Your Loved One
Click Here
Menu

In the event that there is an error
in the information presented,
please contact the funeral
home by clicking here. 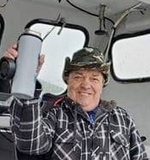 Passed peacefully away at his home surrounded by his family on Tuesday, January 4th, 2022, Newman Blagdon, age 66 years, of Harbour Breton.

Newman was predeceased by his wife, Elizabeth; parents, Edward and Alice Blagdon, sister, Loretta; parents in law, Ralph and Maude Farrell; other relatives.

A Celebration of his life will be held privately for his immediate family.