Use the form above to find your loved one. You can search using the name of your loved one, or any family name for current or past services entrusted to our firm.

Click here to view all obituaries
Search Obituaries
Immediate Need
We are here to help you. If you have need of our services, please call us, day or night, at:
709-885-2609
To better prepare yourself, we have provided you with some helpful information regarding the immediate need process.
Contact Us / Location

We're sorry but the candle you have selected is currenty in the process of being purchased or has just recently been purchased.

Please feel free to select another candle or check back in 15 minutes to see if the candle you have selected has been released for purchase.

We're sorry but there are no candles available for lighting.

You have already begun a candle purchase session. If you would like to continue with your current candle choice please click "Continue" otherwise please click "Select Another".

In Memory of
Ruth Melinda
Priddle
1927 - 2022
Click above to light a memorial candle.

The lighting of a Memorial Candle not only provides a gesture of sympathy and support to the immediate family during their time of need but also provides the gift of extending the Book of Memories for future generations.

In the event that there is an error
in the information presented,
please contact the funeral
home by clicking here. 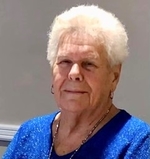 The family of Ruth Melinda Priddle express their gratitude for a lifetime of love with their mother as they announce her passing at age 94 at the Carmelite House in Grand Falls-Windsor, surrounded by her family.

A former resident of Pushthrough, and longtime resident of Milltown, mother’s kindness and her generous soul has touched the lives of so many people who she was proud to call her friends. She will always be remembered for her love of cooking, baking, and sharing whatever she had with others. Mother was active in her community as a member of the Royal Canadian Legion, Seniors’ Club, and ACW, and enjoyed many hobbies and interests. Mother’s happy demeanor, personal strength, and devotion to her family are memories and life lessons that will be cherished forever and she will be greatly missed.

The family is forever grateful to the committee and residents of Greenwood Manor, Milltown for their great kindness and friendship, and to the doctors, nurses, and staff of Carmelite House for the exemplary care and the love shown to mother.

Rev. Hubert Vallis conducted the funeral service at Christ Church, Milltown, on Saturday, Aug. 13 at 11am with interment following at the Anglican Cemetery, Milltown. Pallbearers are some of her beloved grandchildren and great grandchildren, Floyd, Jonathan, Jackson, Alex, Kathrine, and Victoria. Flowers gratefully accepted or donations may be made in her memory to the Christ Church Memorial Fund. Funeral arrangements are entrusted to Spencer’s Funeral Home.

This Book of Memories brings those affected by loss together by encouraging communication and self-expression. By giving friends and family a special place to tell their stories and express their feelings of loss, it helps them care for one another during a very difficult time. Click on any of the links to the right to access features or information within this memorial website.